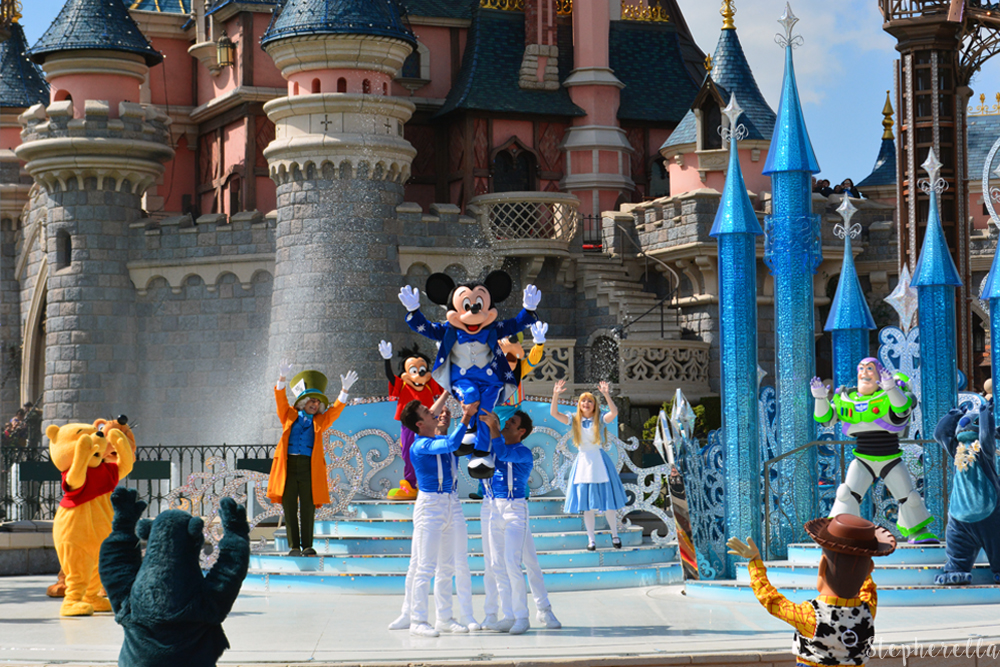 What a day the 12th of April was! My first day in the parks started at 5am. We waited outside the gates and there were already people lined up to join in on the festivities for this very special day. After getting through security, we ran to the main turnstiles with our passes and waited again until they let us in at 8am. It was like a stampede, everyone legged it to Main Street and some of us got split up. We got out spaces, unfortunately, I wasn’t right at the front but they had the same Calvacade on twice more throughout the day. I was so grateful to be standing where I was near Central Plaza. It was full of emotion – I will never forget this type of atmosphere. Opening with Walt’s speech about Disneyland, we then were joined by Mickey and friends not expecting what was about to hit us next. Hundreds of characters came down Main Street to the special Anniversary song which, had me in pieces. Every character you could think of was there. My highlight was seeing Meg and Hercules, Kuzco, Brother Bear to name a few! After a while, the characters stopped dancing whilst CEO Catherine Powell did a speech on Disneyland Paris which was wonderful and heartwarming. Then, we were blown away by even more characters – the rarest of them all by the likes of Nick and Judy also Big Hero. We also had the Cast Member flash mob, which had us all going. There were lots of tears this day!

There were special t-shirts for sale only on that day that said 12th April 2017 on them. I luckily managed to get one but I’ve never seen so many people trying to get a top before. The shop was packed! After the Opening Ceremony, people dispersed into the character meet queues as there were a few special meets that day including Max Goof, Duffy and Clarice. We headed to Small World to get a spot for the second Calvacade after having some lunch at Hakuna Matata, and after that, it was near the Castle. It was the same parade as the morning but what a parade it was. So pleased I watched it all three times. I managed to get tonnes of photos and videos of it and I can’t believe how many characters there actually were! After the whirlwind of the special Calvacade they had put on for the 12th April, it was time to wait for the brand new parade. It was released in March, but the first time I’d see it in person. I was in awe – the new floats are huge and the new song (Lost In The Magic) is so catchy it feels like your at a festival. I’m obsessed with Malifcent’s Dragon. I am so glad we have this in our parade too. Everyone cheered as her flames weren’t working a few days leading up to the Anniversary. I miss Magic On Parade but, this parade blew me away. I am so happy with this new edition to Disneyland Paris.

I met a few characters on the 12th in their special costumes. And of course, Darth Vader – who I didn’t find intimidating at all! He was such a fun meet. After those fun meets, we headed for the new Starlit Princess Waltz which, I couldn’t wait for! They have brand new sparkly dresses and I was so excited to see them. It’s a beautiful show and it fits with the 25th theming perfectly – well worth a watch! The day went so quickly. 14 hours in the park in total. Finished off with a meal in Hyperion for those star-shaped nuggets. I was too tired to watch Illuminations that night but will give my thoughts in another blog post. What an incredible day this was. It ended on a special Goodnight Kiss from Mickey and Friends on the train station balcony on Main Street. Such a lovely touch to an overwhelming day, Mickey waving you goodbye to a slow version of the Anniversary Song. One I will never forget. The memories and emotions will stay with me always. Bring on the 30th.