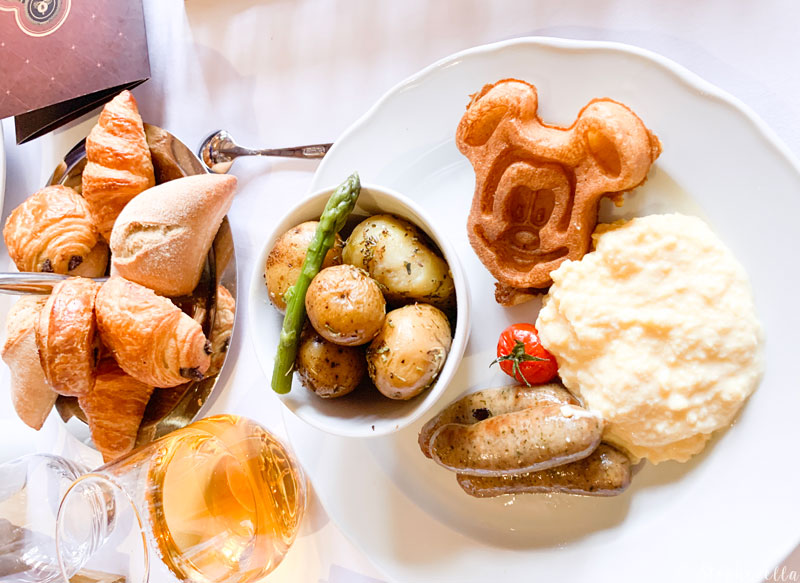 Much like Plaza Gardens character breakfast (that is also in the parks), it has two seatings. One at 8:15am and another at 9:45am. I booked a table for the 9:45am slot as I had previously for Plaza as it had a much more relaxed environment. You could also book this three days prior to your visit.

With the characters, you get Aurora, Snow White and of course Cinderella, all the classic Princesses! I think if it came back I would love to see Suzy and Perla or maybe a Prince just like at dinner. Even a switch up with modern Princesses would be really cool and would make me go back again and again. It was amazing however having all three classics. It is also great not having to visit the Pavilion to meet them and getting food at the same time is fantastic. You can also squeeze in a few attractions during Extra Magic Time if you choose the 9:45am seating. I would advise being as early as you can. We arrived a little late which meant the food came out quite quickly and, as it was, They, however, amended my order for me with no hesitation. The food was a good mixture but still being a really fussy eater there wasn’t much I could eat. I was mainly there for the Mickey Waffle and Princesses so, it was still a magical experience all round! The Mickey Waffle was delicious much like the ones at Walt Disney World. You also get potatoes, sausages and scrambled egg. It is worth telling them in advance if you have any requirements. They are very accommodating and will get it right for you. They had put Mushrooms on mine initially so I just kindly asked them if I could have a new plate without them on. You also receive little fruit dishes on the side and an array of Croissants too with hot and cold drinks.

Overall, my experience was magical and I highly rate this breakfast. I do hope they extend it as it is a lovely alternative to Plaza Gardens and another beautiful place to have breakfast within the parks. I would love to hear your thoughts on this breakfast, would you ever try it out?