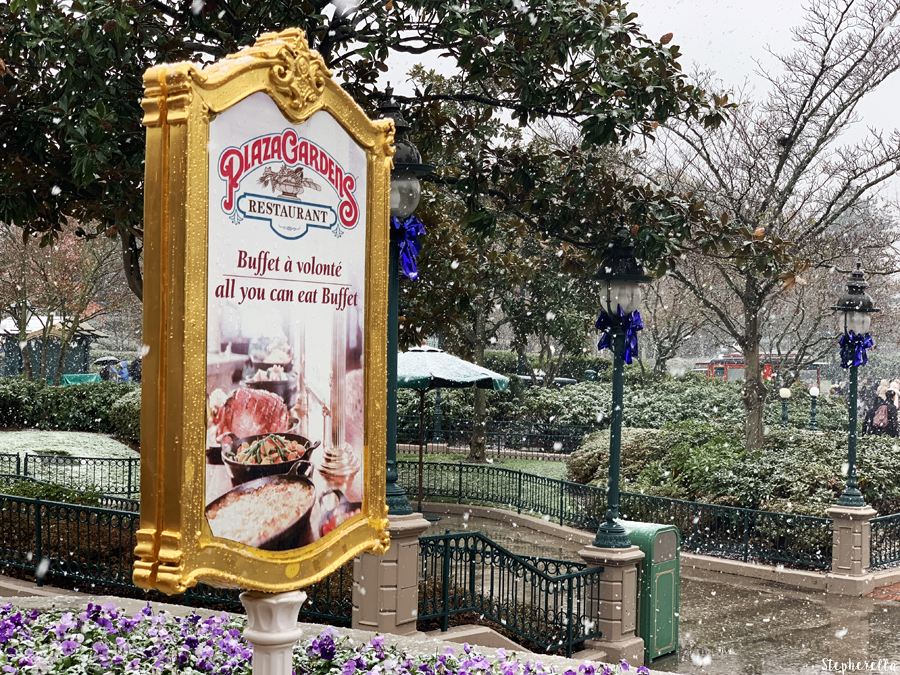 In the past couple of years, Plaza Gardens has added the chance to meet characters during breakfast. It is open during Extra Magic Time and is situated on Main Street. It is quite the perfect setting.

I have heard mixed experiences about this place since they’ve added in characters and I’ve always wanted to try it out for myself. So in November on my Christmas trip, I decided to finally make a booking. It changed to a character breakfast in April 2017 during the 25th Celebrations. This review is long overdue but I have lots to say!

You can book from three days in advance (it gets full very quickly) on the phone line or in the park if you’re there already which, is what we did! I’d get there as early as you can as the queue can be quite big outside like it was for us. The only downside I have about this part is that you end up being squashed in a tiny little room. The reason for this is you have to pay at the door before you’re seated. I’d keep your receipt handy when entering so the waiter can check you’ve paid.

The food at Plaza Gardens is a buffet and being a fussy eater, buffets are a great option as there’s plenty to choose from and a great value for money. From Pancakes and Cereal, there will be something for everyone and you can go up as many times as you like with free refills of drinks too.

The characters come round pretty quickly. I decided to wait a while before ordering food whilst the first three came round. They start either 8:15 am or 9:45 am, which is the one we did. Mickey, Daisy, and Scrooge were the first to meet us. Scrooge isn’t about in the parks often and was the reason for making me want to try Plaza Gardens. He is out at Christmas but I wanted to meet him in his classic outfit and not the 25th Anniversary one. This set of characters were great as they were all very interactive! The last three characters arrived around half an hour between the first and this experience, wasn’t so great. They had Character Attendants with them who were making them rush and, they all came out at the same time.

Nobody knew where to go first. At one point, they were waiting behind each other too as it created a backlog. The rushing of the meets dampened the experience ever so slightly. This set included Piglet (who is another rare character to meet), Tigger and Eeyore. My overall experience was a positive one which is great.  Hearing the mixed reviews made me wary of booking but, I’m so pleased I did it and it was the perfect timing as it was snowing outside! Now that character breakfasts have been removed from Hotels, this is a fabulous addition to the parks aside from Disney Villiage and restaurant Inventions. It is also a much cheaper option and I’d highly recommend booking three days before you go!

Have you tried Plaza Gardens or willing to try? Would love to know your thoughts!