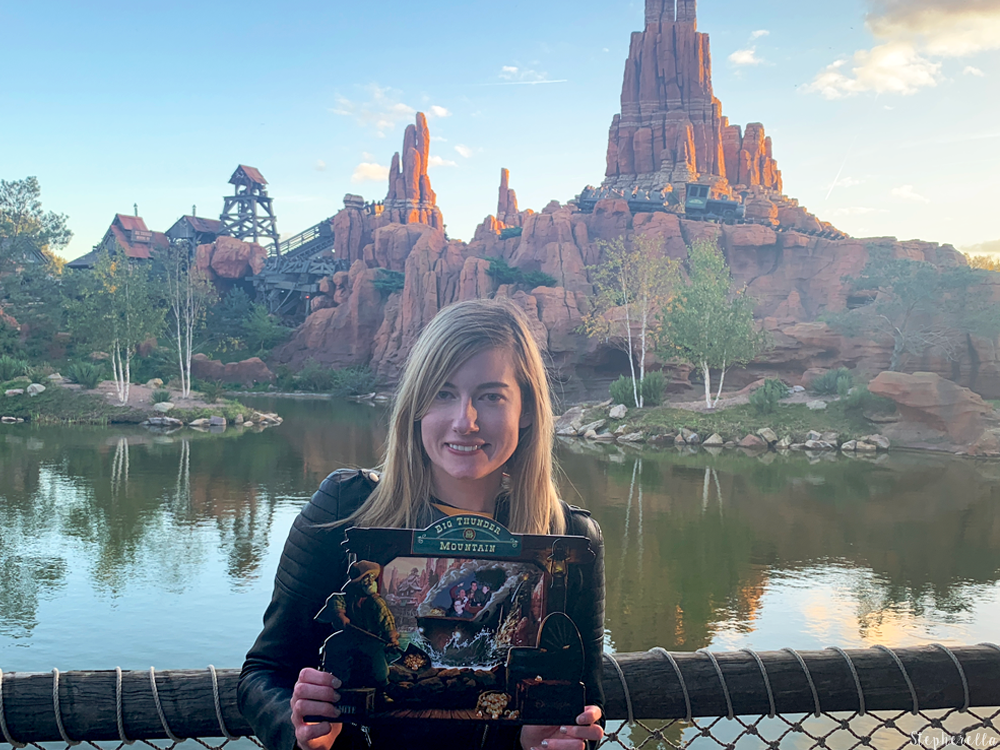 Well, this is a post I’d never thought I’d be wanting to write first after a Disney trip. This weekend I’ve experienced the brand new Halloween Season at Disneyland Paris and Disney Loves Jazz and not forgetting the Rendezvous Gourmet Food Festival. But, I have to get my thoughts down about the biggest highlight for me which was conquering the wildest ride of the wilderness Big Thunder Mountain. A few years back during Swing into Spring, I went on a day trip to Disneyland Paris and I went on Big Thunder Mountain without knowing what to expect and had the worst experience. Since then, I have had the biggest fear of even attempting to go back on. My friend who I was with at the time, wanted to go on a big ride as we only had a few hours after all the entertainment.

I had heard it went pretty fast and I am not a fan of roller coasters at all. I have a huge fear of the unknown and being sick so, I tend to avoid things that I think will make me throw up at all costs. I have such bad anxiety that the long queues do not mix well with me as I start panicking about wanting to leave. This time the park was semi-quiet and we walked straight on with no thinking time at all. I asked the Cast Member if it wobbled a lot he reassured me that it didn’t to which – it did, and prompted me to take my ears off.

To say I was petrified would be an understatement as I came off shaking and crying not enjoying it in the slightest. That was the first and last time I said I will go on Big Thunder Mountain until the 1st of October 2018. This year though, I have been talking myself into going on Big Thunder Mountain. I wanted to feel that adrenaline rush, the good adrenaline, not the anxiety-filled feeling I always get. This trip, that finally happened, all thanks to amazing friends. A big thank you to Martin from Holiday Hamster who is a great friend of mine.

Saying I will go on it with them both during the trip meant no backing out. I had finally done Pirates at the beginning of the year and was thinking of the drops and how they would be similar and the safety bar helped. So next to face was obviously BTM. I thankfully had an orange card for the bit of help with the queue for my anxiety and got a return time on the Monday evening after eating in Chalet de la Marionette.

I promised I kept saying in my head as we walked around to the mine train I couldn’t let them down. We strolled over after looking at the wonderful Coco decorations in Frontierland and moments later, we were being ushered in by the Cast Member to my fate. We got put near the front which Steve and Martin both told me that these were the best places to sit as at the back it’s a bit rougher. And we were off on the wildest ride in the wilderness. At first, I was fine (clinging onto Martin of course) and then the turnings happened. I didn’t like the turnings at first because it sped up a lot and they became more and more intense as you got higher round the mountain. It was then pitch black (or was that my eyes shut?) either way, I couldn’t tell you if we had the new smoke effects or not. This part was quite scary for me but, it was downhill from here. Then it was time for the infamous mountain Goat, we shall call him Billy. From this point, hearing the goat got to me and I started chuckling and crying with laughter the whole way around to the finish.

The last hurdle was coming which you can see from Thunder Messa. I had watched this train turn here from the other side of the river for years building up to go on it. To actually be at this part of the ride was a thrilling accomplishment even if my stomach did turn a few times. I didn’t expect so many hills at this part but then it was time for a photo which I was smiling in! I had done it! I also really enjoyed myself! I was crying but this time, however, they were happy tears. Did I throw up? Not at all. Will I go on it again? Of course! I had to buy the photo in a souvenir frame as a reward for facing my fear. I felt that happy adrenaline rush that I was longing for and it felt good. I hope this post reassures people who want to go on it themselves and that you have the most fun in doing so! Again a bit thank you to Martin and Steve for helping me on and having the greatest ride in the far west!

I can’t wait for my next trip to ride again.